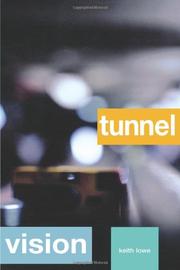 Newcomer Lowe emerges from the underneath England with a longish, lightish story of a man’s one-day journey across London by subway.

Andy is a Tube buff. He really likes it. But he can’t tell you why. Nor can he explain it to his fiancée Rachel. But, still, Andy buddies around with the likes of Rolf, a Tube freak more troglodyte than man. On the night before Andy’s wedding in Paris, Rolf tricks Andy into a bet: Can he do the whole Tube system in a set number of hours? And can he do it with most of his belongings and, yes, his very marriage on the line? He bloody well can! A bet’s a bet, so when Andy wakes up in the morning after the drunk that got him into this mess, all he can do is abandon his fiancée, pray she understands, and set off on his journey. And, joined almost at once by homeless Tube-denizen Brian, a journey it becomes. You wouldn’t think two men trying to catch trains could be much fun, but the story becomes the source of not a little tension. The men encounter derailments, suicides, stunning Italian beauties who may be spies from Rolf, and naked men. Whoa—the Tube is fun after all! Some of the underground details almost make you wish this had been done as nonfiction, but Andy’s not a bad guy, Rachel’s got a perfect body that is referred to many times, and Brian just keeps getting more interesting. Buried in this almost 400-page book is a perfectly reasonable 200-page travel story of friendship and modern quests.

Aims low, but hits the mark precisely. Hugh Grant should watch the mail for this romantic comedy. It’s probably already on its way.