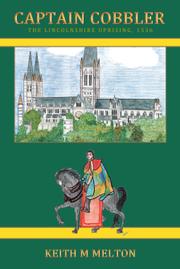 The Lincolnshire Uprising 1536
by Keith Melton
GET WEEKLY BOOK RECOMMENDATIONS:

Using original historical sources, Melton’s novel takes place mostly following King Henry VIII’s break from the Catholic Church after the monarchy introduced the Dissolution of the Monasteries, one of its most divisive religious and political reforms, which began in 1536. In the small town of Louth in Lincolnshire lived a shoemaker named Nicholas Melton (a real historical figure but of no definite relation to the author). Though a simple cobbler by trade, he had great faith in Catholicism, and he soon found himself leading an uprising against the crown’s reforms. Dubbed Captain Cobbler by the townsfolk, and flirting with death by hanging stemming from charges of treason, Nicholas led the insurgents all the way to Lincoln, dressed in his multicolored Coat of Motley. With a cast of more than a hundred characters—many genuine historical figures­­—author Melton channels the spirit of his namesake (if not his ancestor) while presenting a vivid portrait of early 16th-century England during a most tumultuous time. With a thread of insurrection sewn throughout, the novel unfolds a colorful tapestry of the townsfolk of Louth and surrounding Lincolnshire as they debate and execute their plan to take on the royals. Via flashback, the narrative bounces from Nicholas’ jail cell in the Tower of London on the morning of his scheduled execution, to the fateful days of uprising in October 1536—then to his boyhood and teen years, and the early life of King Henry VIII and Catherine before the turmoil. The changing points of view can be confusing, though, as many chapters lack date and place references, and some of the material seems superfluous to the story. Generally, the archaic dialogue works well, though it may be too antiquated for some readers, and the shortage of plots twists and lack of a stronger story arc might keep the pages from turning more quickly. Regardless, Nicholas was certainly a noble man still worth following.

DEFENDERS OF THE FAITH
by Jr. Reston
Newsletter sign-up