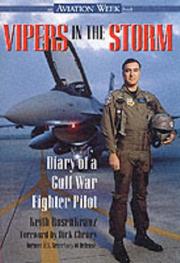 VIPERS IN THE STORM

Diary of a Fighter Pilot

Rosenkranz gives a personal account of his career as a pilot of the F-16 fighter plane (nicknamed the “Viper”) and his experiences in combat during Operation Desert Storm. Rosenkranz begins his story with a training exercise in the US that is interrupted with news of the Iraqi buildup along Kuwait’s border. From there, the story escalates as rumors of his unit’s possible deployment are heard. Rosenkranz deftly tells of his own mixed feelings about possible combat—on one hand, excitement, as this is the mission he has been training for, on the other hand, apprehension about leaving his wife and twin infant daughters. Interjected into the narrative is a thumbnail history of the nation of Iraq, the Iran-Iraq war, and the regime of Saddam Hussein, which provides invaluable background for the story (and for more current events). Rosenkranz offers a near-epic account of the flight of his unit (it took 17 hours and 10 aerial refuelings) to their station in the United Arab Emirates. The tale’s high point, however, is not the combat itself, but rather the anticipation of combat as President Bush and the UN coalition drew the line in the sand and waited for Iraq to back down. Rosenkranz describes with insight and clarity the feelings of men who have been trained to fight a war but have never done so, and the intense feelings that built up among the air crews as they sat in the hot desert waiting for war. Despite the surprisingly clichÇd accounts of aerial combat (which sound like they—re straight out of Top Gun), Rosenkranz (who works today as a commercial pilot) paints a vivid picture of an airman’s service in the last Gulf war. Former secretary of defense Dick Cheney contributes a foreword. (25 illustrations, not seen)