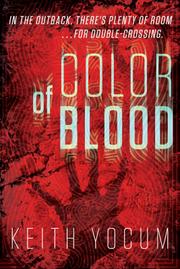 Returning to work after his wife’s death, a CIA investigator leaves on assignment for Australia, where he encounters danger, romance, and, unexpectedly, poetry.

As this thriller opens, CIA investigator Dennis Cunningham lies on the ground staring at the shoes of the person who betrayed and then shot him. The novel flashes back six months, when Cunningham returns to work after a lengthy bereavement leave. His boss asks him to soften his usual confrontational style and track down Geoffrey Garder, a junior agent who disappeared while working in Australia. What initially seems to Cunningham like a demeaning “Cub Scout assignment” becomes more intriguing when he arrives in Perth, in part because of his Australian Federal Police contact, recently divorced Agent Judy White. Cunningham is attracted to the Aussie with the shapely legs and upturned nose, and she is drawn to the gruff, blue-eyed Yank. As Cunningham learns more about Garder, such as his penchants for poetry and rare watches, the missing agent’s car is located in the Shark Bay area. It’s assumed he went snorkeling and became lunch for a great white. But when Cunningham discovers Garder’s belongings were covered in uranium, questions emerge. Believing the shark theory suspicious, Cunningham thinks the agent may still be alive. His investigation takes him home to the U.S., then to Switzerland, and finally back Down Under. Because Yocum (Daniel, 2015, etc.) has lived in Australia, descriptions of Perth and the surrounding area are vivid. While working the case, Cunningham discovers the beautiful colors of Australia—the green-blue waters, orange-red dust, and pink tufted birds—but he also encounters another hue, the color of blood. In an unrelated drug-deal case, White falls victim to violence but survives a searing torture scene. She and Cunningham learn that, aside from their jobs, they have several other things in common. For example, each has only one child, and both parent-child relationships enrich the book. The scenes of Cunningham and White helping each other on their cases are especially smart, and their romance feels genuine. Along with suspense related to their assignments and the possibility of being double-crossed, there’s tension over whether their extremely geographically challenged relationship can survive.