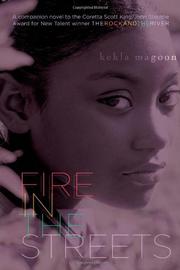 FIRE IN THE STREETS

The Black Panthers seem to have the answers for Maxie and her friends, so when a traitor to the group is suspected, she is determined to find who is leaking information to the Chicago police.

Maxie and her brother Raheem are deeply involved with the Black Panther Party. The shooting of a close friend and ongoing conflicts with the Chicago police make the radical group seem like the only protection they can count on. Problems at home—their mother’s unemployment, drinking and various boyfriends—make the Panther office a refuge for Maxie, and she presses to become a real member: armed, trained and patrolling the streets like her brother. She is deemed too young, so when Maxie hears there may be a traitor in the Panthers, she decides to discover who it is and prove she is ready to take a real place in the organization. The discovery changes everything and forces Maxie to face almost unbearable truths. In this companion to award-winning A Rock and the River (2009), Magoon explores the role the Black Panthers played in urban communities during the tumultuous times of the late ’60s. Maxie is a believable and feisty character. Her interactions with her brother and his efforts to be the parent their mother seems incapable of being both ring true, as does her relationship with Sam, still grieving the death of his brother. Historical moments such as the riots during the 1968 Democratic National Convention strengthen the sense of time and place, but this is primarily an authentic story of a young person attempting to grasp where she will stand in the struggle.

A well-written, compelling trip to a past not often portrayed in children's literature.