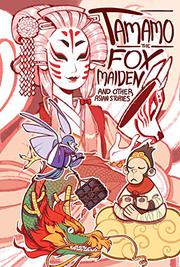 And Other Asian Stories

From the Cautionary Fables and Fairytales series

An ethnically diverse assembly of artists present graphic interpretations of Asian folktales ranging from silly or spooky to dark and mysterious.

The collection contains 21 stories unevenly representing the continent; 11 are from China or Japan, with four selections from India and one each from the Arabian Peninsula, Georgia, Tibet, Myanmar, Turkey, and Laos. The comics vary in length and popularity just as much as they do in the looks of their artistic styles. While the majority of retellings follow a traditional approach, some include modern touches. “#EndoftheWorld,” by Shannon Campbell and Lucy Bellwood, finds Makara, the vahana, or mount, of the river goddess Ganga from Hindu culture, communicating the imminent end of the world via Twitter. Most of the tales are stand-alone ventures; “Gold Sister, Silver Sister, and Wood Sister,” by Blue Delliquanti, is a sobering tale from Tibet about how a family that’s cruelly manipulated by a ghost eventually banishes her. Other, shorter comics give brief glimpses into larger legends; “From the Journey of the Monkey King,” by Gene Luen Yang, gives the backstory of how Pigsy comes to join the infamous Journey to the West. There’s a mix of light and dark themes; “Hoichi the Earless,” by Nina Matsumoto, tells how a monk successfully eludes ghosts—but not without a price. While some stories will inevitably stand out more than others, each black-and-white rendition is solid in its storytelling.

An eclectic anthology sure to provoke, amuse, and entertain.