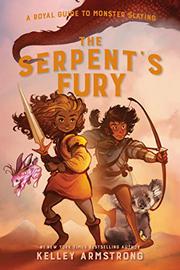 From the Royal Guide to Monster Slaying series, volume 3

Princess Rowan and her friends find trouble and monsters in equal measure in Armstrong’s latest installment.

Though it seems like Rowan and her close-knit hunting party only just left the Dunnian Woods, they have returned for yet another monster mission—or rather to finish the last one. As royal monster hunter, this responsibility is part of Rowan’s heritage; as a nearly 13-year-old monster and science enthusiast, it is a thrilling opportunity to put her growing knowledge and skills to the test. But something isn’t right. A mysterious catalyst has caused a change in migration patterns as monsters of every type flee an unseen terror—and they’re headed straight for Rowan’s home of Tamarel. Rowan, Dain, Alianor, and some old and new friends make a perilous journey deep into the woods to figure out what could have frightened so many powerful creatures. As the terrible answer steadily becomes clearer, Rowan is faced with the truth that monsters do not have a monopoly on monstrosity. Through Rowan’s first-person narration and natural attention to details, Armstrong immerses readers in her ever deepening external and internal worlds. The effect teeters on disorienting as Rowan’s thoughts flood the pages, but intricately choreographed battles, weighty encounters with politics, and introductions to new monsters (enchantingly rendered in the accompanying illustrated field guide) pace what would otherwise feel frenzied. Characters in this world have a range of skin tones; the citizens of Tamarel are brown-skinned.