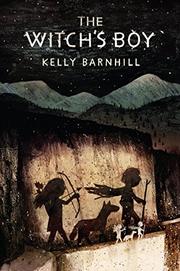 Nine enormous boulders are awakened from their long sleep by the actions of a seemingly powerless boy and the daughter of the Bandit King.

Since his identical twin’s death and his own near-drowning, Ned has spoken with a stutter, and villagers believe that “the wrong boy” survived. Ned doesn’t know that his mother, Sister Witch, in desperation, used the magic she holds and protects to join his brother’s soul to his, despite the fact that “[i]t was a dangerous thing, her magic. With consequences.” Áine, meanwhile, is growing up with a father whose behavior increasingly worries her, especially the way he fondles a pendant he’s begun wearing and the fact that he has been bringing home a frightening group of bandits. In fact, the Bandit King is after Sister Witch’s magic, and when she leaves town, he tries to force Ned to surrender it to him. Instead, Ned takes the magic upon himself, at a cost of great physical pain as the words burn into him and the magic keeps talking to him, and he is kidnapped. Barnhill skillfully interweaves the stories of Ned, Áine, Sister Witch and the stones, along with an intriguing group of secondary characters. The third-person narration switches perspective smoothly, and it’s all related in a precise, flowing prose that easily places readers into the fantastic setting and catches them up in the story.

The classic fantasy elements are all there, richly reimagined, with a vivid setting, a page-turning adventure of a plot, and compelling, timeless themes.