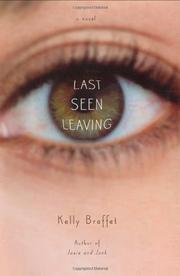 A suspenseful, emotionally resonant story about a mother and her daughter caught in the mystery of her husband’s disappearance.

Braffet’s lean prose, taut pacing and subtle characterizations here live up to the promise of her debut (Josie and Jack¸ 2005). Anne’s husband Nick was a pilot, a charming thrill-seeker and Vietnam vet who went from flying combat in Laos to flying cargo in undisclosed Central American locations. Then the shadowy Western Mountain Aviation called to say Nick’s plane had gone down, though they never did find it or him. Distraught, the young widow took her daughter Miranda and fled Pittsburgh for Sedona and the comforts of New Age spiritualism. Twenty years later, Miranda has grown into an angry, isolated 28-year-old dropout, drifting between bad jobs and poor relationships. An unnamed woman has walked away from a car crash and is picked up by a middle-aged man in a sedan. Anne suddenly can’t reach her daughter, and sets off to find her. As Anne collects heartrending, baffling clues, we watch Miranda move closer to the dark undertow of her unhappy life. The author’s carefully drawn characters and incisive observations on human nature form the heart of her novel. Miranda and Anne are flawed, highly sympathetic beings who struggle to face life in the face of unresolved grief and an impossible web of deceit. Braffet teases the reader with the possibility that all will be revealed about Nick’s disappearance, plus a barely-there subplot about a serial killer, but brilliantly plays against genre expectations by placing the real suspense in Miranda’s ability to care for herself enough to allow Anne to find her.