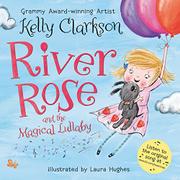 RIVER ROSE AND THE MAGICAL LULLABY

Little River Rose has a magical adventure in Clarkson’s debut as a picture-book author.

Depicted as a little white girl with straw-colored hair, River Rose is so excited about tomorrow’s trip to the zoo that she cannot sleep until her mother sings the titular lullaby. In the middle of the night, she is woken by balloons squeaking outside her window. Grabbing them and her little black puppy, Joplin, she sails through the night and is deposited in the middle of the zoo. There, she and Joplin are greeted by throngs of happy animals for a night of play. It all comes to a halt when the polar bears tell her they’d rather not play but sleep: “The trick to fun is to let the day be done. / That's the secret that we keep,” they say. In a closing sequence that will mystify many young listeners, River Rose and Joplin snuggle down with a big polar bear and three cubs and then, with the turn of the page, are back in bed, the magical balloons sparkling quietly to the side. Clarkson’s text unreels in rhyming couplets that often feel forced when read aloud but may sound just right in the accompanying download (not available for review). Hughes’ scratchy illustrations are appropriately ebullient but add little to the text.

Clarkson’s fans may like this, but Kenny Loggins’ Footloose, illustrated by Tim Bowers (2016), is a superior zoo adventure/song combo.