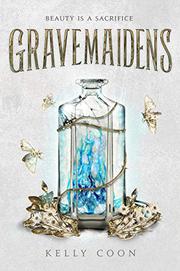 Can 16-year-old Kammani’s skills as a healer save her family?

Kammani’s mother is dead. Her father—who was once the best healer in the city of Alu—drowns his grief in alcohol. Her brother, Kasha, was stolen by the royal family as a punishment for Kammani’s father’s inability to heal the ruler’s dying son years before. Kammani’s sister, Nanaea, is all she has left. But when Nanaea is unexpectedly chosen to be a Sacred Maiden—one of three young women chosen to be killed and buried with the ruler upon his death—Nanaea believes it’s a chance to recapture her family’s glory. Kammani knows better. In a desperate bid to save Nanaea’s life, Kammani is determined to heal the ruler at any cost—even her own life. Coon builds a rich and detailed world complete with a history and rules that readers will enjoy uncovering slowly. While the setting feels satisfying, the characters do not. Kammani’s constant insecurity about her romance with Dagan, for example, feels superficial, as does the entire town’s obsession with the Sacred Maiden ceremony. Furthermore, the prose often feels clunky and stilted, a pattern that becomes even more obvious when compared to many passages of easy, witty dialogue. The last third of the book is the strongest, as though the author finally found her way. Characters have a variety of different skin tones.

A middling debut that promises a more polished sequel.