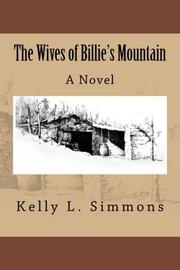 The Wives of Billie's Mountain

An elderly woman reflects on her early years living as a Mormon on the run in author Simmons’ absorbing debut novel, based on a true story.

In 1898 Utah, 10-year-old Mary Higginsen, her nearly blind mother, and her brothers and sisters are taken by their father to Billie’s Mountain to live in a cave to avoid his arrest for polygamy. Mary and her relatives are a second family; Father has another wife to whom he is legally wed. After helping them to settle in, Father returns to town to his first family, leaving elder son Zebedee in charge. Believing the separation from Father to be temporary, the children work nearly constantly, cooking, washing and planting, although their efforts are sometimes for naught. Earnest Zebedee remains thankful for small mercies, but recalcitrant Mary has doubts: “If this was God’s idea of a blessing, it certainly was a sorry one.” In winter, supplies run dangerously low. As weeks pass without Father, Mary is increasingly angered by her family’s blind trust and their predisposition to suffer while Father’s other family presumably lives in comfort. Facing frostbite and starvation, they are rescued by a neighbor, Brother Bigler. He, too, practices plural marriage and is drawn to Mary, who resists his advances. She realizes the significance of polygamy (multiple wives ensure progeny), but Mary has no wish to be submissive or to marry. Although initially a survival tale, recalling some of the sacrifices in Susan Beth Pfeffer’s Life As We Knew It (2008), the novel skillfully addresses the claustrophobic, cultlike burden of belief and how a willful individual like Mary could be coerced to comply. Through no fault of their own, the Higginsens are treated like “beggar children” by one of Brother Bigler’s wives, who will later risk her own status in an act of kindness to Mary. Perhaps Brother’s wives aren’t as happy as they claim. Sensing the incongruity, resourceful Mary both adapts and rebels. In a genre saturated with faux apocalyptic tales of teens in peril, here’s an emotionally wrenching narrative out of U.S. history.

Powerful, historically based novel of survival, beliefs, adaptation and resistance.