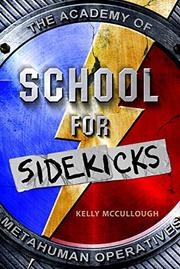 After Evan horns in on a super beat down between A-list archnemeses Capt. Commanding and Spartanicus shortly after his 13th birthday and against all odds survives, he wakes up enrolled in Hero High with—a dream come true—a set of variously useful new powers ranging from superhealing to supersnarky banter. Outfitted with a stylish costume and the moniker Meerkat, he delightedly joins a set of new roommates for classes like “Combat with Dinnerware” and “Bantering Basics.” But the dream takes on a nightmarish cast when his intern assignment hooks him up with Foxman, once a respected hero but now a depressed recovering alcoholic. Moreover, he learns that the whole Masks vs. Hoods thing isn’t an ongoing battle between heroes and villains at all but a secret government project with unusually vicious internal policy conflicts. Nor is there any clear distinction between good guys and bad. Still, Evan keeps his idealism intact and ultimately lands on his feet even as he works his way through thorny family and loyalty issues. Readers will savor his triumph as well as the melodramatic plot and the cast’s rib-tickling array of “metahumans,” including the unfortunately named Hotflash, HeartBurn, the dangerous Fromagier (Evan: “Sweet barking cheese, Foxman!”), and the shape- and gender-shifting Blur.

Leaps the tottering stack of similar “sidekick” novels in a single bound.