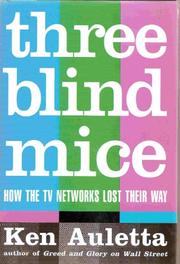 How the Networks Lost Their Way

As in his Greed and Glory on Wall Street (1986), here Auletta offers a behind-the-scenes account of a clash of corporate cultures, manifested in formidable egos fighting over turf. The battlegrounds are ABC, NBC, and CBS, which, beginning in the mid- 1980's, went through five years of wrenching change occasioned by technology and takeovers. Since 1976, the three major networks have lost one out of three viewers because of cable, video, satellite, increasingly independent affiliates, and the upstart Fox network. Starting in 1986, the Big Three's proud but complacent old guard of newscasters and entertainment programmers were administered shock treatment by their tightfisted new bosses: Lowes' Larry Tisch at CBS, GE's Jack Welch and Bob Wright at NBC, and Capital Cities' Tom Murphy and Dan Burke at ABC. Despite differences in strategy and managerial style, Auletta demonstrates, the networks thereafter became engaged in ``the same struggles between public versus shareholder responsibility, the same almost religious conflict between old and new values.'' Yet, except for several vividly drawn episodes (e.g., a skirmish between Brandon Stoddard and Roone Arledge, heads of entertainment and news, respectively, at ABC, over the scheduling of 20-20), Auletta seems to have drained this material of pungency, perhaps because of his unusual access (1,500 interviews with over 350 people) and his admirable objectivity. Moreover, the narrative seems hastily cobbled together, both in terms of overall organization and line editing (Efrem Zimbalist, Jr., was not ``Dynasty's male lead''). A conscientious but weak attempt to show how, amid the ``new video democracy'' enjoyed by viewers, the three networks squirmed on their thrones.