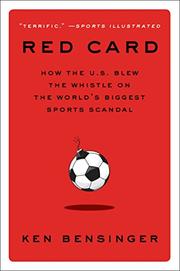 How the U.S. Blew the Whistle on the World's Biggest Sports Scandal

Investigating and prosecuting corruption in the world’s most popular sport.

On May 27, 2015, after several years of slow, meticulous investigation on the part of a number of agencies, most notably the American FBI and IRS, Swiss police conducted sweeping arrests of large numbers of high-ranking functionaries gathered for elections for Zurich-based FIFA, world soccer’s governing body. Corruption across the sport has been endemic for decades, and in this fine, deeply researched, painstakingly assembled book, BuzzFeed News investigative reporter Bensinger shows how American agencies homed in on corruption within CONCACAF, the governing body for soccer in North and Central America and the Caribbean. Fortunately, the narrative is not as ham-handed as the subtitle, which turns the years of investigation into some sort of simplistic nationalist triumph. Working diligently for years, FBI and IRS officials revealed patterns of corruption—bribery, graft, outright theft—much of which passed through American banks and other institutions and which amounted, in their estimation, to racketeering. A focus on the two highest-ranking CONCACAF officials—the deeply compromised American Chuck Blazer and Trinidadian Jack Warner—expanded to include a large swath of FIFA’s hierarchy, especially in North, Central, and South America and the Caribbean. The book is deeply sourced. However, because of Bensinger’s reliance on hundreds of hours of interviews with anonymous sources, it is somewhat thinly documented, and readers will have to trust the force of the argument and the mountains of clear evidence (as well as the successful prosecutions). As the author notes, “the saga of corruption within FIFA and worldwide soccer as a whole is immeasurably complicated.” Perhaps most shocking is that there is little evidence that FIFA and organizations such as CONCACAF have really cleaned up their acts.

A deeply forensic investigation of the depth of corruption within FIFA and its regional bodies that also shows how much work goes into high-level criminal investigations.