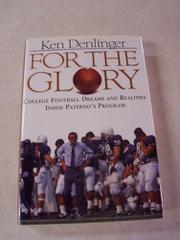 A thoughtful and compelling book following the members of a single recruiting class at Penn State's distinguished football program through their college gridiron careers. By the end of their four (and in some cases five) years of college football, the group of 28 young men who had entered the school in August 1988 were reduced to a near-handful by injuries, academic shortcomings, transfers, and graduation. They had come to the small town of State College to play for one of the sport's fabled coaches, Joe Paterno, a man with a reputation for combining coaching excellence with a commitment to academic and ethical integrity. Denlinger, a Penn State alumnus who covers college football for the Washington Post, found that reputation for the most part merited. However, this is neither a bronzing of Paterno nor a whitewash of college sports. Given the trajectories of the young men he covered, that would be impossible. As Denlinger proves, college football is a bruisingly brutal sport, and several of the students he followed found their careers ended abruptly by torn-up knees, battered backs, and a variety of fractures large and small. About midway through the book, Denlinger observes, ``All college football players fall into two categories: The haves and the have-nots.'' To his credit, much of his book focuses on the latter group—from a student manager who improbably became the team's long snapper to the kids who never got much playing time. Finally, he closes by suggesting two major changes in college football: the elimination of artificial playing surfaces and a severe cutback in scholarships. Denlinger captures in equal parts the frustrating pain and the adrenaline-pumping thrill of playing college football at the highest level.