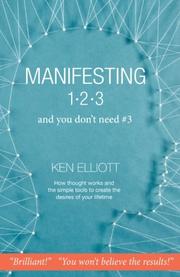 A self-empowerment speaker shares techniques and stories about harnessing the power of thought in this debut self-help guide.

Colorado-based artist Elliott was “drowning with an issue in my life” when a woman named Judy Goodman introduced him to visualization and other psychological concepts to better manage his thoughts. Elliott then “sent” flowers and other gifts to people by visualizing them. He “had doubts like everyone else,” but soon realized that “Your thoughts create virtually every object and concept around you,” and that “what you are thinking directs the path of your life.” In this book, he outlines his system of fostering the “law of attraction,” beginning with the first step—envisioning one’s future as a “Movie” using these lead-in words: “I am in my future and in my future...” He encourages embracing gratitude and avoiding fear and worry, and offers advice on removing negativity from one’s language in the second step. As noted in this book’s title, Elliott doesn’t offer a third step because, he says, one’s thought power is “already happening” and his method merely helps to “increase the chances” of manifesting one’s desires. He shares several people’s stories of successful manifesting, including his own; in one example, when he was stressed about selling his house, Elliott envisioned selling it at a price he could find acceptable and then got an offer. Elliott brings an unsurprisingly cheerful tone to this positive-thinking tome but also some refreshingly nuanced elements, including a warning to expect the occasional “unexpected outcome” and to modulate or even delay one’s desires. His “Movie” concept is an easy, relatable exercise, as is his suggestion to list seven things for which one is grateful. Although this author remains a bit mysterious about details of his own life (such as the specific issue that he was “drowning with”), this doesn’t completely detract from the overall narrative. The book also includes several workbook pages at the end.