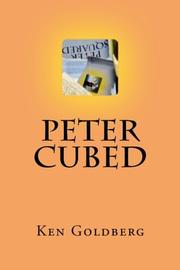 Goldberg’s sequel to Peter Squared (2012) pushes the boundaries of the literary novel.

Picking up where his first novel left off, Goldberg’s story begins with Peter Branstill still stuck in his hopelessly neurotic life of mathematical calculations, obsessions with contamination and masturbation. Having met his friend John’s day program buddies Anna, Dave and Herb, Peter falls in with the crowd and is eventually sucked into Anna’s plan to go off her medication for good and escape her abusive husband and father. Halfway through the book, the author himself literally steps in to rewrite the story, berating and brainwashing Peter via instant messenger and otherwise dictating the plot of the book—first from afar and then by joining his characters in a small Nebraska town. As Peter and his friends struggle to escape the author’s control and lead their own lives, things get progressively weirder. An unsatisfying denouement situated somewhere between fantasy and reality will leave readers wondering what just happened and why. The metanarrative, featuring a sick, sadistic author attempting to torture his characters in order to sell more books, feels oddly forced and ultimately struggles to make larger points about how authors play God. Instead, the author appears to condemn himself as both a mentally unstable doctor in need of therapy and an anti-Semite. Rather than the helpful psychologist or eminent mathematician described on the book’s back cover, Goldberg indulges in an extremely negative self-portrait, however fictional it may be. Few of the bizarre elements in the book hold up to scrutiny, as they’re directly referenced, poor imitations of originals, including Taxi Driver and Dr. Strangelove. While the novel aims to be literary, it seems more at home with mashups like Pride and Prejudice and Zombies.

A wild ride with a dark side that could be too much for some readers.