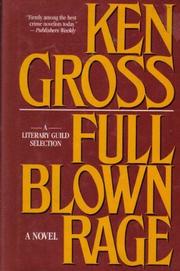 Gross takes time out from his series about ex-cop Jack Mann and weather forecaster Bonnie Hudson (A High Pressure System, 1994, etc.) to introduce a new heroine: Lt. Maggie Van Zandt, head of Manhattan North Detective Command. Shocked and grief- stricken when her friend Cissy Stone kills herself after getting word that she's HIV-positive, Maggie throws herself into solving the stabbing of Random House editor Edie Severance—who could've been killed by her boss, her lover, or the lover's husband—and the suspiciously neat murder-suicide of an East Side lawyer and his wife. Even as she painfully begins to read the journal Cissy was keeping in the last weeks of her life and gets to know the last man Cissy was involved with, we can already see her biggest case raging under her nose: Eric Miller, a lab technician who's been infected with HIV by a slip of the finger, has embarked on a mission to dramatize the plight of ``innocent'' AIDS victims. His plan: to infect dozens or hundreds of equally innocent victims, starting with casual pickup Prof. Laurie Drake and ending, if necessary, with Maggie Van Zandt. Not as densely imagined as Jack and Bonnie's adventures, but professionally textured and propulsive, with a particularly attractive heroine.