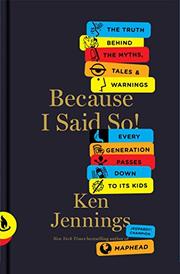 BECAUSE I SAID SO!

The Truth Behind the Myths, Tales, and Warnings Every Generation Passes Down to Its Kids

The latest in the brainy and engaging Jeopardy! champion's series of breezy reads (Maphead: Charting the Wide, Weird World of Geography Wonks, 2011, etc.) offers bite-sized chunks that could be devoured in a couple of hours, though more readers are likely to use it piecemeal, looking for answers to specific questions. As the preface explains, the author “compiled 125 of the nagging Mom-and-Dad-isms that we all grew up with, and then I’ve meticulously researched the scientific evidence behind them.” Meticulously, though not necessarily dryly, as his writing is filled with good humor that is occasionally even a little edgy. Thus, when he refutes “Don’t talk to strangers!” by showing that children are far more at risk of kidnapping and other dangers from someone they know: “The most serious problem with ‘stranger danger’ is that, statistically, it’s completely backward….The only kind of ‘stranger danger’ I’m willing to inflict on my children is a mortal fear of Billy Joel’s 1977 album The Stranger. It’s never too early to instill correct musical taste in your kids.” Readers will learn, if they haven’t guessed already, that you don’t need to wait an hour after eating before swimming, that masturbation will not result in hairy palms, that sitting too close to the TV isn’t all that bad for your eyes and that eating the Christmas poinsettia leaves won’t kill you. (“The truth is that you’re probably safer eating an entire potted poinsettia than you are eating Grandma’s holiday fruitcake.”) But bicyclists should always wear a helmet, and breakfast really is the most important meal of the day.

“Occasionally Mom knew what she was talking about,” as this clever book confirms, but often she did not.