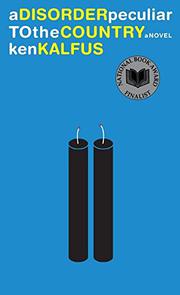 A DISORDER PECULIAR TO THE COUNTRY

The fallout from 9/11 casts a pall over an already moribund marriage in Kalfus’s second novel (following his terrific The Commissariat of Enlightenment, 2003).

When NYC working mom Joyce Harriman hears the bad news about the World Trade Center, she instantly fantasizes that her husband Marshall (who works there) is among the dead. In fact, he walks out alive, and back into a contentious détente in which the battling spouses coexist angrily in the comfy apartment neither wants to give up, tiptoeing around the needs of their demanding, borderline-“difficult” young children Viola and Victor. Kalfus deftly charts the unraveling pair’s separate experiences of resentment, loneliness, pursuit of replacement love (or at least sex) in assorted wrong places and the gradual adjustment to their irreparable incompatibility. Bravura sequences include Joyce’s rather sad and pathetic seduction of a longtime friend’s unhappy husband, Marshall’s amusingly intricate demolition of his sister-in-law’s wedding and—in an ingeniously contrived scenario that nevertheless doesn’t quite work—Marshall’s failed attempt to dignify his despair and frustration by becoming a suicide bomber. Both the strength and the weakness of this clever novel in fact inhere in the structure of parallels Kalfus draws between the Harrimans’ escalating “war” and the embattled Middle East, beyond the terrorist bombings here at home, through the U.S. invasion of Iraq and into a fantasized alternative future that slyly mocks America’s—and the Harrimans’—naïve idealism. Both Joyce and Marshall are sharply drawn characters, and Kalfus makes us feel their pain even when both are indulging their most infuriating traits (her quick resort to temper tantrums, his tendency to hatch overly elaborate plans that collapse under their own weight).