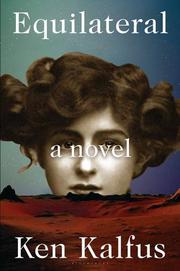 The fifth book and third novel by Kalfus (whose wonderful A Disorder Peculiar to the Country, a National Book Award finalist of 2006, dared to make 9/11 the backdrop to a divorce comedy) is a slender but ambitious tragicomedy of ideas set in 1890s Egypt.

British astronomer Sanford Thayer has mounted a gigantic international scientific and engineering effort—employing 900,000 fellahin—to dig out an equilateral triangle, each side 300 miles long, in the desolate Western Desert. His plan is to put nearly 5,000 square miles of pitch into the excavation and to set it afire...at a moment in the summer of 1894 when the desert will be clearly visible to Mars. The geometric conflagration cannot fail, he believes, to attract the attention of the no-doubt highly evolved inhabitants of the red planet, beings whose phenomenally impressive canal-building Thayer and other stargazers have for years been watching and mapping and/or fooling themselves about. There is another sort of triangle in play here, a romantic one involving the obsessive Thayer, a man near physical collapse and largely confined to quarters in the makeshift village at remote Point A, and two females: Miss Keaton, Thayer's limitlessly competent and patient helpmeet/assistant, and a young Arab serving girl who speaks no English. A compelling portrait emerges not only of Thayer and his brand of scientific imperialism, but also of 19th-century positivistic science at its most arrogant. Thayer proceeds with an air of utter certainty. Progress knows only one path, as he sees it, and the Earth is a pliant female creature whose duty it is to yield her secrets to the probing male scientist and his adjunct, the engineer. But there are forces and mysteries at work here that are beyond him.

Kalfus maps the boundary between science and mysticism while simultaneously muddying, in a way the 20th century soon would, the previously bright line between scientific certainty and arrogant, self-deluded error.