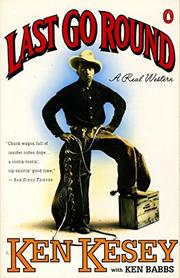 by Ken Kesey with Ken Babbs

Kesey (Sailor Song 1992, etc.) has written a historical western that amusingly mixes fact and fiction to tell the politically correct story of a multiracial trio of cowboys who achieve a state of spiritual harmony that transcends cultural differences. The author heard the true story of the first Pendleton Round-Up, a world champion rodeo competition, from his father while sitting around a campfire when he was 14. Kesey decided to elaborate on what he had been told by using his imagination rather than any documents he might find combing through "musty archives." Last Go Round, then, tells the story of three men — local black cowboy George Fletcher, the Nez Perce Indian Jackson Sundown, originally from Idaho, and Johnathan E. Lee Spain, a white teenager from Tennessee — who become close friends during their quest for the championship broncobusting title in 1911. Fletcher and Sundown are considerably older and more experienced than Spain, yet they treat the younger man as a professional and emotional equal, giving this coming-of-age tale a sweet-natured, poignant tone. Basically plotless, the novel tracks the three men through their various — and often comical — rodeo performances, also following their romantic shenanigans and their run-ins with the underhanded Buffalo Bill Cody and their arch-nemesis, the menacingly muscular wrestler Frank Gotch. Although much of the dialogue is written in a charmingly primitive vernacular style, the novel's overall philosophy is a kind of contemporary enlightened humanism, where women and minorities are treated, for the most part, as emancipated equals of their white male counterparts. With co-writer Babbs (On the Bus, not reviewed), Kesey relishes the chance to create a revisionist view of a particular time and place in American history, using the anchor of a real-life event (documented in 16 pages of b&w photos of the actual Pendleton Round-Up) to substantiate his delightfully entertaining vision of goodness triumphing over evil.