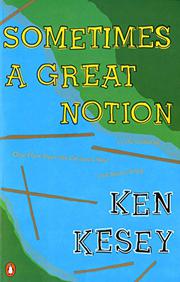 Ken Kesey's One Flew Over the Cuckoo Nest was one of the best novels of he 1962 season and certainly the most striking in many years. The frantic nostalgia of the half-Indian schizophrenic, his remembrances of the Great Wakonda Valley in Oregon, the anti-conflicts between the institutionalized over-sane and the institutional collectivists, these were portents of things to come. And they've come abundantly in Sometimes A Great Notion, a novel of mammoth size and proportion: eloquently gritty, uncompromisingly exhaustive, big, bold, unique and haunting. It begins when Lee Stamper returns home after 12 years in the East. Home to the Stamper logging camp to pull off "the greatest put-down in history." To avenge himself, his mother, his lost childhood, Lee Stamper, hipster, intellectual, plans cuckold his strong-willed, phlegmatic Captain Marvel of a brother, Hank. He also returns to a dying father and a union squabble between the town of Wakonda and the Stamper philosophy from time immemorial: NEVER GIVE A INCH. The conflict between the brothers brings Lee to the realization that to fully be is to recognize oneself as a will, as a force, whether the object of that force is a river, or a tree, or a community of factious men... There are those who will find Kesey's narrative-form distracting. The narrative is told by every character in the story, and there are many. He interpolates, parenthesizes, changes from voice to voice with heady abandon. He NEVER GIVES A INCH, because possibly it's the only way...Attention certainly.