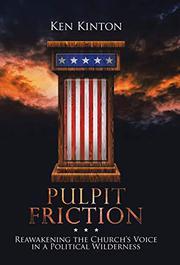 Reawakening the Church's Voice in a Political Wilderness

A timely discussion of the relationship between Christianity and contemporary U.S. politics.

Noting the mounting tensions inside American churches over politics, Kinton (Descending Mount Sinai, 2017, etc.) endeavors to provide Christians with a guidebook on how to unite conservatives and liberals within the Church without compromising fundamentals of the faith. Urging Christians to avoid the hot-button issues of our day, he instead calls for them to “speak on universal political truths.” By focusing on these broad issues, Kinton hopes that Christians of all political ideologies can align. His strongest chapter is a nuanced discussion of the various ways Christians have interpreted “nonviolence” and practical applications today. This chapter attempts to build not only bridges across political lines, but denominational lines as well. He brings in the perspectives of evangelicals, Jesuits, and Charismatic Christians. Other chapters touch on income inequality and racism and corresponding analyses of leading Christian thinkers (from both the right and the left of the ideological spectrum). Kinton’s efforts at finding common ground, while noble, may prove frustrating for everyone in that they don’t provide much critical assessment of either side. (This is one of the few works that favorably cites both far-right pundit Ann Coulter and black liberation theologian James Cone.) Though Kinton admirably seeks to unite the seemingly ununitable, it’s evident that he leans toward conservative evangelicalism. His chapter on prophecy concludes with a standard “End Times” narrative held to by mostly evangelicals, and his discussion on “sexual immorality” presupposes a traditional interpretation of biblical sexuality that lacks the nuance found in his discussion of nonviolence and other issues. Most glaringly given the political context that inspired the book, the author only neutrally mentions Donald Trump, while criticizing Hillary Clinton. Ironically, one uncritical reference to Trump is not only included in the chapter on sexual immorality, but comes only a page after the author alleges that liberals too often “revert to labeling and name-calling.”

A fundamentally conservative work that only partially succeeds in finding common ground with the Christian left.