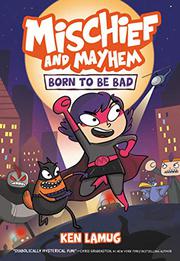 Born To Be Bad

From the Mischief and Mayhem series, volume 1

First exploits of a would-be superhero and her doughty side-cat.

Missy Go’s mother works outside the home and supports the family financially while her father runs the household. Rafi, her little brother who is adopted, is a straight-A student, unlike Missy. Afflicted with a mischievous streak but yearning to be a superhero, young gadgeteer Missy and her orange tabby cat Gizmo hie off to superhero boot camp—where, alas, she falls in with fellow camper Melvira, who uses her superpowers (or does she?) to make Missy think she’s a good friend, gets them both kicked out, and persuades her that it’s more fun to be a villain. The two have very different ideas about what constitutes villainy, though, and when pranks like stealing all the toilet paper in town don’t float her boat, Melvira trots out both a giant robot and a weapon that sucks the powers out of superheroes. At this, Missy, suited up as “Mischief,” with costumed kitty “Mayhem” attending, reluctantly switches sides. Framed mostly as a flashback, the action hurtles along through irregular panels of hyperkinetic cartoon action and snarky banter to a climactic face-off featuring epic robot battles, lots of slime and toilet paper, and, at the end, drawing lessons and space to create your own characters. Missy and her parents appear Asian; Rafi reads as Black, and the supporting cast is broadly diverse.

A rousing kickoff for the Captain Underpants crowd.