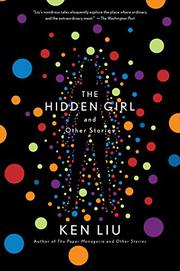 THE HIDDEN GIRL AND OTHER STORIES

Science fiction author (The Wall of Storms, 2016) and translator (The Redemption of Time, Baoshu, 2019) Liu’s short stories explore the nature of identity, consciousness, and autonomy in hostile and chaotic worlds.

Liu deftly and compassionately draws connections between a genetically altered girl struggling to reconcile her human and alien sides and 20th-century Chinese young men who admire aspects of Western culture even as they confront its xenophobia (“Ghost Days”). A poor salvager on a distant planet learns to channel a revolutionary spirit through her alter ego of a rabbit (“Grey Rabbit, Crimson Mare, Coal Leopard”). In “Byzantine Empathy,” a passionate hacktivist attempts to upend charitable giving through blockchain and VR technology even as her college roommate, an executive at a major nonprofit, fights to co-opt the process, a struggle which asks the question of whether pure empathy is possible—or even desired—in our complex geopolitical structure. Much of the collection is taken up by a series of overlapping and somewhat repetitive stories about the singularity, in which human minds are scanned and uploaded to servers, establishing an immortal existence in virtuality, a concept which many previous SF authors have already explored exhaustively. (Liu also never explains how an Earth that is rapidly becoming depleted of vital resources somehow manages to indefinitely power servers capable of supporting 300 billion digital lives.) However, one of those stories exhibits undoubted poignance in its depiction of a father who stubbornly clings to a flesh-and-blood existence for himself and his loved ones in the rotting remains of human society years after most people have uploaded themselves (“Staying Behind”). There is also some charm in the title tale, a fantasy stand-alone concerning a young woman snatched from her home and trained as a supernaturally powered assassin who retains a stubborn desire to seek her own path in life.

A mixed bag of stories: some tired but several capable of poetically piercing the heart.