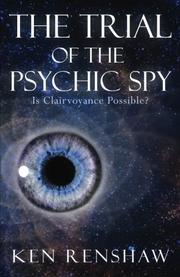 THE TRIAL OF THE PSYCHIC SPY

An attorney who deals in scientific facts must prove the validity of psychic phenomena for a negligence lawsuit involving a girl’s death in this legal drama.

Dave Willard is a California patent lawyer who has no time for “New Age mumbo jumbo,” which his schoolteacher girlfriend, Raven, fully embraces. So he’s surprised when his boss at Bracken & Stevens assigns him a case that will entail arguing in favor of a man’s apparent clairvoyant ability. The suit’s against a county sheriff, who disregarded former CIA psychic spy Steve Manteo’s help in finding a girl, Lucy, who was lost in the mountains during a blistering cold winter. Manteo psychically deduced Lucy’s location, but the sheriff refused to send searchers to that area, where, much later, they found the girl frozen to death. Dave sets his skepticism aside and, in fact, has already had a potential vision—a dream of a car collision that may have occurred afterward. He preps for the trial by interviewing people to establish scientific logic to clairvoyance and authenticate Manteo’s neglected credentials. Unfortunately, a group called Skeptemos, intent on ridding the world of bad science, has someone following Dave with a possibly sinister agenda. Renshaw (Science, Remote Viewing and ESP, 2013, etc.) excels at presenting much of the psychic phenomena in a credible light. Dave, for one, makes the trial about Manteo’s qualifications, including his CIA achievements recognized by the U.S. president. Similarly, Dave’s shift to belief in clairvoyance (he ultimately has another vision filled with World War I images) is gradual, not something that happens instantaneously. But while the narrative plainly explains psychic phenomena, it won’t necessarily sway skeptics. An expert on the stand, for example, expounding on remote viewing, states: “We all are mental space-time travelers” without listing hard facts for support. Grammatical and spelling errors, meanwhile, are hard to ignore, especially name variations (for example, Skeptemos is rendered four ways).

An engrossing tale of a lawyer’s determination to legitimize clairvoyance, even if some readers may remain unconvinced.