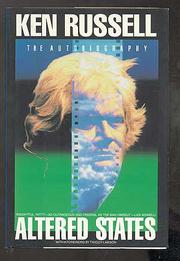 The Autobiography of Ken Russell

The former enfant terrible of British cinema, now in his 60s, bares all, pretty much. Russell takes his life episodically, hopping about with flashbacks and flashforwards in no particular chronology. In print, he is a charming, sometimes waspish storyteller with axes to grind only against his American distributors who have taken his pictures and lopped off whole reels (e.g., The Boy Friend). Raised in the working-class, he introduces us to his mother and father as dad prepares senile mom for her last days in a nursing home. He pieces together his days in the RAF and the Merchant Marine and five years as a ballet student and dancer. Russell early fell in love with photography, and his amateur films earned him entrance into TV, where he made exciting shows about composers. That these shows were often viewed as pictorially cuckoo travesties in no way damped his spirits: he didn't see them that way. And he had access to bottled spirits anyway, ever breakfasting on a half-bottle of champagne to get the morning charged up, with an iced bucket of bubbly at his side throughout the day's shooting. Through Russell's eyes, his work seems a lot less appalling than it is famed to be—a fame reinforced by the posing Nazis in Mahler, the TV set that erupts with chocolate sauce and buries Ann-Margaret in Tommy, the shrinkage of Liszt to rock-'n'-roll pop-star satyr in Lisztomania (a degradation Russell feels was forced upon him when he was unbankable). Highlights include duels with Paddy Chayevsky during the making of Altered States and with Bob Guccione for an aborted Moll Flanders, his first wife Shirley's tit-for-tat adultery with their chauffeur, and Oliver Reed's way of puffing himself up behind a screen for the nude wrestling scene in Women in Love. A modest demythologizing from the horse's mouth. (Photographs—not seen.)