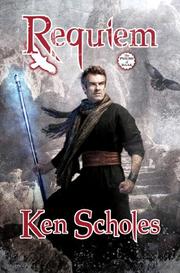 The long-awaited fourth and penultimate installment of the sci-fi/fantasy saga The Psalms of Isaak (Antiphon, 2010, etc.) takes off running and doesn’t stop.

A generations-spanning plan has borne its violent fruit, and the Y’Zirites, an empire of religious zealots who believe that ritual bloodletting and scarification “heal the world,” are on the verge of conquering the Named Lands. However, various factions of resistance are prepared to make their last stand. The remaining armies plot one final, devastating act of sabotage. In accordance with a message from her long-dead grandfather, Lady Jin Li Tam intends to assassinate Y’Zir’s mysterious Crimson Empress. Jin’s husband, Gypsy King Rudolfo, pretends to collaborate with the conquerors while secretly plotting their defeat. Meanwhile, Jin’s father, Vlad Li Tam, now possessed of a devastating magical artifact, pursues his own terrible purpose in Y’Zir. And those are only some of the threads of a complexly woven story (others include exploring the ruins of a highly advanced civilization on the moon and the desperate flight of an amnesiac mechoservitor and the little girl who loves him). Jumping into the series at this point is decidedly inadvisable, but readers of previous volumes will be enthralled—and entirely occupied with keeping track of which side everyone’s on, as the genuine and the elaborately faked betrayals pile up. As various parts of the epic’s plotlines become clearer, motivations become murkier; it’s still anyone’s guess how this will end.