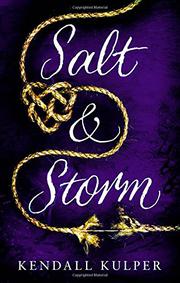 A 19th-century 16-year-old witch yearns to return to her birthright.

The anachronistically named Avery Roe is destined to be the next Roe witch, selling her magic to protect the whalers of her New England island. Her grandmother had been raising her as her apprentice until Avery’s magic-hating mother dragged her away to town. Four years later, Avery is still trapped by the only magic her mother is willing to use: a curse preventing Avery from fleeing or soliciting help. Forced to live without magic, dressed up in fancy clothes and trained in a Victorian young lady’s accomplishments, Avery is both self-loathing and self-harming. While she can interpret dreams for anyone who asks, Avery lacks any hint of how to unlock her magic. Her aging grandmother can no longer serve the town’s magical needs—and meanwhile, Avery’s been having prophetic dreams of her own murder. A young, tattooed Polynesian sailor named Tane needs Avery’s dream-telling assistance, and he swears he can end her mother’s curse. When Tane tattoos Avery with his magic (a regrettably exoticized moment), perhaps she’ll be stronger than her mother at last. Secrets abound in Avery’s world, and nobody’s as villainous as she suspects.

A fat, slow-moving, sensuous fantasy for fans of watery paranormals