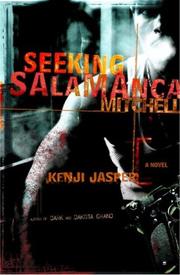 A jazzy, fluent rendering of the life of an aspiring musician and composer who finds himself jailed for seven years just as his great love gives birth to their child.

Jasper’s third (after Dakota Grand, 2002, etc.) opens with Benjamin Baker, a young, bright African-American boy on the streets of DC, taking a job with Alfonse Mitchell, the successful owner of a neighborhood restaurant. Mitchell, seeing promise in the diligent Baker, invites him to assist in some shady late-night robberies—crimes that help support Mitchell’s enviably lavish lifestyle. Baker, who has become one of Mitchell’s most trusted lookouts during the residential robberies, finds himself entranced by Salamanca, Mitchell’s daughter. (As is Jasper’s writerly habit, there are no average women in his work: they are either pear-shaped, wise older women, or nodes of erotic desire, sweet young things with bustout bosoms and bottoms). Plunged into a deep love that thrums to the beat of Baker’s lively musical compositions, the couple begins to plan a future every bit as bright as their present circumstances foretell. But Baker is set up, takes the fall for Mitchell, and goes to jail shortly after Salamanca confides in him that she’s pregnant. Baker keeps his sanity while he’s inside by remembering Salamanca’s love and thinking about seeing her again—while Salamanca herself goes into hiding from her father, the man who took her lover down. After his release, Baker is tempted to rejoin his musician friends but stays true to his only meaningful goal: to find Salamanca and start things over. Yet the itch for revenge on Mitchell is strong, and though the old man eventually gets his due, Baker narrowly escapes disaster.

Written in loose, loping prose, a story that’s entertaining enough, though in the end rather quietly routine.