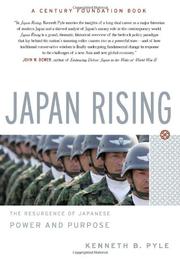 The Resurgence of Japanese Power and Purpose

by Kenneth B. Pyle

The land of the rising sun is poised to rise again as a regional, and even world, power. So holds noted Japan specialist Pyle (History/Univ. of Washington).

Cultural relativists reject the notion of national character, but Pyle suggests that there is something in the homogeneous nation’s makeup that can be used to gauge the future. He approvingly quotes anthropologist Nakane Chie, who wrote, “We Japanese have no principles. . . . Except for a few leftists or rightists, we have no dogma and don’t ourselves know where we are going.” Pyle holds that this anyway-the-wind-blows pragmatism is a consequence of the leadership’s recognition long ago that Japan is a resource-poor island nation with very powerful neighbors; he writes that it has had many consequences, among them the only partial fulfillment of the postwar MacArthur equivalent of de-Nazification, since the American government feared that a resentful Japan, forced to acknowledge its bad and definitely ideological behavior, would wander into the Soviet camp. The lack of ideological firmness, by Pyle’s account, means that WWII was an aberration, “a sweeping rejection of the Japanese heritage” in the lust for national power. Chastened, Japan sat out most of the Cold War on the sidelines, Pyle writes, building economic strength in part by not having to shoulder the costs of defense. In the wake of 9/11, U.S. politicos have demanded that Japan pay those costs, which, ironically, may contribute to Japan’s revival as a power. Pyle observes that this revival is contingent on many factors and can take many forms, depending on the scenario—that old pragmatism again. For instance, an Asia with a reunified Korea will look very much different from the present one, particularly if Korea plays China off Japan. How will Japan react? And how will Japan respond if America does not remain “deeply engaged in East Asia and committed to maintaining a balance of power”?

The author does not doubt the revival itself. An interesting thesis, backed by a strong historical narrative.