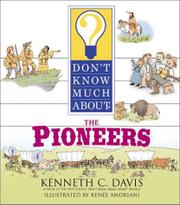 DON’T KNOW MUCH ABOUT THE PIONEERS

In an addition to his series that repeatedly demonstrates how much we don’t know, Davis tackles the pioneer days and routes to the west. The flyleaf sets the tone by alerting readers to the “cool quotes” and “fascinating sidebars” of the volume and proclaiming, “The West doesn’t get any wilder than this.” An accessible resource for the many teachers who do units on the Oregon Trail, this offering covers such topics as Lewis and Clark, mountain men, trail dangers, the Gold Rush, cowboys, railroads, and Indian wars. The question-and-answer format invites browsing and offers a fair amount of information, but the work is condescending to young readers who don’t need silly illustrations and dumb questions to entice them. “Did the pioneers take the Yellow Brick Road to Oregon?” “Did the pioneers use their best parachutes for jumping off?” “Were there Pilgrims on the trail?” The breezy, casual style fails to provide sufficient context for the occasional serious sidebars, such as General Sherman’s statement that “the more Indians we kill this year, the less will have to be killed in the next war.” The work does succeed in one of its missions—to tell the interesting story of real pioneers “who braved harsh winters and burning summers, disease and disaster, to head west in search of a dream come true.” Though an adequate introduction, this is not for serious readers. (time line, additional resources) (Nonfiction. 6-9)