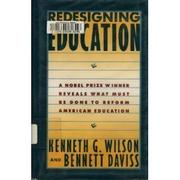 Nobel prizewinning physicist Wilson tries to illuminate the black hole that is the American educational system. Wilson and journalist Daviss begin where good science begins: defining the problem. US education, they argue, is based on a model—a 19th-century assembly-line model—that simply doesn't work any more. Tinkering, as in raising teachers' salaries or extending the school day, won't solve the problem. What will, among other things, is looking to the successes of corporations in what Wilson and Daviss call the redesign process. It begins with a ``compelling vision'' and continues in the pursuit of excellence through a process of ``research, development, dissemination, and refinement.'' Boeing, Apple, and the Union Pacific Railroad are examples of companies that have used that formula to advantage, involving customers and workers in the redesign. None of these ideas are new, nor are the components they suggest for redesigning education, including Total Quality Learning as demonstrated in Sitka, Alaska (based on Total Quality Management, it involves consulting the ``customer,'' in this case children, teachers, and parents); the idea of students learning from one another; and the more sophisticated and general use of computers as tools for both students and teachers. What is refreshing is the emphasis on relieving teachers of their classroom isolation and offering them professional support and opportunities for continuing development. The authors envision (and offer a budget for) a group of nationwide lab schools, that would draw teachers from surrounding districts to experiment with new programs, new systems, and new ways of managing and teaching. Teachers would then return to their districts to train their colleagues. Still another look at what's wrong with our schools, but one that that targets what makes educational reform so elusive: a continuing communications gap between the classroom teacher—the one who really matters—and the rest of the education profession.