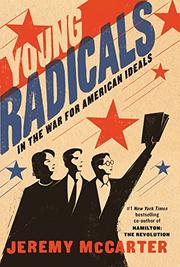 In the War for American Ideals
by Jeremy McCarter
BUY NOW FROM
AMAZON
GET WEEKLY BOOK RECOMMENDATIONS:

In the decade before World War I, five rebellious Americans took up the cause of socialism, progressivism, and women’s suffrage.

A former cultural critic for New York and Newsweek, McCarter (co-author: Hamilton: The Revolution, 2016, etc.) began his research for this book six years ago, a time of political gridlock, voter apathy, and cynicism. America in the 1910s beckoned as a stark contrast: “a country vibrating with hope, supremely confident in its prospects, charging into the future, not just in its politics, but socially and culturally, too.” At the head of the charge were five radicals: Max Eastman, John Reed, Randolph Bourne, Walter Lippmann, and Alice Paul, whose personal and professional careers McCarter traces in vivid detail. The four men were writers: Eastman became editor of The Masses, a journal outspoken in its support of socialism; Bourne, a hunchback due to a childhood illness, championed “the unpresentable and the unemployable, the incompetent and the ugly, the queer and crotchety people…like him.” A perceptive social critic, he became Lippmann’s colleague on the New Republic, a politically radical startup. In his reporting and book Ten Days that Shook the World (1919), Reed heralded the Russian Revolution as a harbinger of social change. Lippmann, the most influential of the men, evolved from being “the boy wonder of socialism” to support the progressivism of Teddy Roosevelt and eventually join the administration of Woodrow Wilson. Paul’s story, as McCarter shows, is the most violent: her tireless, combative campaign for a federal amendment for women’s suffrage put her at odds with others in the movement, resigned to state-by-state ratification. She suffered degrading imprisonment, forced feeding, and bloody confrontations. “We have no true democracy in this country, though we are fighting for democracy abroad,” she proclaimed, as America joined the controversial war. That war, and the failure of the peace process, left the nation spiritually exhausted, unleashed racial and ethnic hatred, and undermined the radicals’ efforts.

A brisk pace and sympathetic portraits make for an entertaining, well-researched history of a decade marked by ebullience, hope, and pain.

WHY WOMEN HAVE BETTER SEX UNDER SOCIALISM
by Kristen R. Ghodsee
Nonfiction

THE HOUSE OF TRUTH
by Brad Snyder
Nonfiction