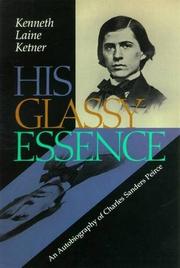 An Autobiography of Charles Sanders Peirce

Framed as an “autobiography” full of deliberate fictional creations, this life of Pragmatism’s founding genius is a breathtakingly original attempt to reinvent the dry habitudes of biography. Unfortunately, it is also an epic, perplexing failure. The first of an anticipated three volumes, this account takes us, in a jittering, wildly idiosyncratic way, through the first 28 years (childhood and schooling) of Peirce’s life. In the frame-tale manner so popular in the 19th-century novel, Ketner (Philosophy/Texas Tech Univ., A Thief of Peirce: The Letters of Kenneth Laine Ketner and Walker Percy, not reviewed) has created a labyrinth of multiple narrations. First off, there is fictional interpolator Ike Eisenstaat, a writer of detective stories. Digging through a box that his wife, Betsey Darbey, inherited, he comes across Peirce’s fragmentary autobiography, which he then proceeds to flesh out with additional notes, anecdotes, commentary, etc. Then there are the explications of Peirce’s philosophy, provided by his centenarian student, LeRoi Wyttynys. The autobiography as such consists of Ketner’s clever, but impossibly fragmentary, compilation and distillation of autobiographical snippets from Peirce’s various writings. Peirce was one of the 19th century’s great minds; his influence on everything from philosophy to semiotics has been enormous. But he is not well served here. The general effect is confusion and tedium. Ketner knows his subject almost too well, forgetting that the general reader, especially given the complexity of Peirce’s thought, needs a more straightforward grounding, at least intermittently. The author does dig up some interesting tidbits, including a secret first marriage, and convincingly traces, as much as his disjointed structure allows, the early beginnings of Peirce’s ideas. But as much as one wants to salute this audacious project, Ketner’s style, sensibility, and methodology don—t rise to the occasion, begging the ultimate question, “Why?” (20 b&w illustrations)