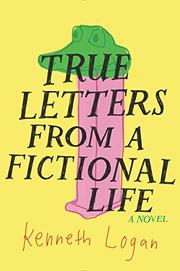 TRUE LETTERS FROM A FICTIONAL LIFE

When the truth is a secret, even friends believe the fiction.

Vermont 17-year-old James Liddell is a cute, popular (enough) athlete, and so are his friends. He likes how people behave toward him when he is with his sort-of girlfriend, Theresa—but when he’s honest with himself, he has a crush on his friend Tim Hawken. James is only 100-percent honest in the letters he writes to friends and family but never sends. He locks them in a desk drawer and has written so many he’s lost count. Then he meets Topher and begins cautiously to come out. When he’s just started to crack the closet door, someone steals some of the secret letters and sends them to their intended recipients—and everything threatens to come crashing down, just as James has always feared it would. Can he juggle coming out, a new boyfriend, old friends, and the mystery of who stole his letters? Logan’s debut is a funny and realistic coming-out tale set firmly in the present in a small, upper-middle-class, mostly white Vermont town, where black friend Derek stands out. The rounded characters deal with betrayal and honesty and love and near tragedy in ways teen readers, gay or straight, will recognize. If there are an awful lot of “dudes” in the dialogue, that just adds to the verisimilitude.

Just the right touch of humor, mystery, drama, and romance should earn this a place on every teen bookshelf.