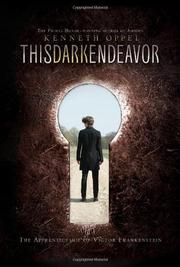 The Apprenticeship of Victor Frankenstein

When his identical twin Konrad falls ill, 15-year-old Victor risks life, body and soul to try and find a cure in this prequel to Mary Shelley’s Frankenstein by Printz Honor–winner Oppel (Airborn, 2004).

Though Victor has always felt an unreciprocated sense of sibling rivalry toward his brother, he will do anything to save Konrad. His parents trust in new medical treatments, and his cousin Elizabeth Lavenza prays to God, but Victor starts studying occult books in the secret library of his family’s excessively gothic Swiss chateau. Seeking ingredients for the Elixir of Life, Victor, Elizabeth, Konrad and their friend Henry Clerval embark on a quest “all the more glorious for being full of dangers and terror.” Victor’s umpteen narrow escapes provide a welcome distraction from a somewhat incestuous and laboriously developed love triangle. The author gestures toward big issues—religion, women’s rights, class inequality—but focuses primarily on extensive action sequences. Victor too often describes himself in relation to Konrad, but he develops into a complex and troubled character as the inevitable conclusion draws near. A subplot involving a crippled alchemist and his pet lynx steer the story more toward horror and fantasy than Enlightenment-era science fiction. A dark and dramatic back story for Shelley’s tormented creator. (Gothic. 12 & up)