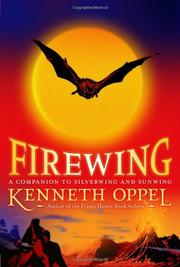 His mother’s a hero, his father’s a legend, and he’s named after the mythical griffin—half eagle, half lion. But Griffin, the newborn bat, is not strong, powerful, or heroic. He is a “little bat who wasn’t special in any way.” Better to have been named Twig or Weed, he tells himself. When Griffin fails in his one attempt at impressing his friends by stealing fire from the humans, he horribly burns his best friend Luna and sets into motion a harrowing journey through the Underworld of the evil bat lord, Cama Zotz. This third installment in the series continues the story of Shade, who arrives on the scene in time to attempt a rescue of Griffin. Lurking in the Underground with Shade is Goth, the cannibal bat from Sunwing (2000). At the same time, Lord Zotz has a deadly ambition: “I will rise and kill the sun. The two worlds of the living and the dead will be collapsed into one, and I will reign.” Oppel’s writing is beautiful in its evocation of the bat world, especially of flights through the moonlit forests, the bat community at Tree Haven, and the bats’ use of echo vision. However, there is a problem with voice in the story. When the author has Griffin talking to himself about the effects of an earthquake, the bat says, “What we have here is a cave-in kind of situation.” Later, he notices “an escape kind of situation.” Readers are told that Shade’s facing a council of elders “freaked him out.” Such inelegant writing is unfortunate in the midst of a fine tale that fans of the series will eagerly anticipate. (Fiction. 10-12)