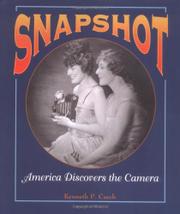 ``America Discovers the Camera'' is the subtitle for this history of the first hundred years of still photography, from its beginnings in France with Niepce and Daguerre, through Brady's pioneering work during the Civil War, the settlement of the West, tintypes, stereographs, cartes de visites, Eastman's revolutionary advances that brought photography to the masses, and on through the Depression. The birth of motion pictures is also described. This absorbing introduction to a subject of which most readers know little has the added virtue of framing the major events of the century preceding WW II. The book is filled with black-and-white photographs, so when a picture is described and not shown, it is frustrating; the developments of the past half century, mysteriously, are only briefly mentioned. Despite these minor omissions, this is a remarkable and intriguing volume. (bibliography, index) (Nonfiction. 10+)