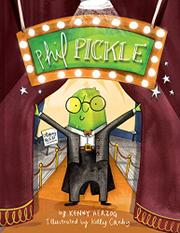 Most pickles just wait for their turns to be served with burgers and fries. Not Phil.

No, Phil yearns to be an actor. Ignoring the sour naysayers in his jar, he’s already hired an agent and scheduled an audition (for a laundry commercial). But does he have what it takes to beat the teeming competition? Shouldering past both a waiting-room crowd and a moment of weakness (“I’m nothing but a glorified condiment”), he gives it his all—and, despite an abrupt dismissal, learns later that he’s landed the gig! In cartoon illustrations paired to Herzog’s legibly hand-lettered narrative, Canby outfits her warty wannabe thespian with big round spectacles and dresses him, as he acts out his dreams, in a closet full of imaginary costumes. Not only is Phil instantly the talk of the entire grocery store, but he “became an inspiration to pickles everywhere.” Better yet, when jar mate Helen Pickle later declares her determination to become a kickboxer, even the sourest pickles cheer her on.

Real aspiring actors should be warned that it’s not going to be that easy. Still, a feel-good story any way you slice it.