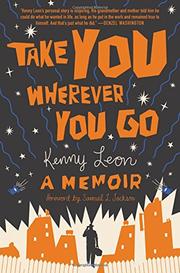 TAKE YOU WHEREVER YOU GO

by Kenny Leon with John Hassan

A Tony Award–winning director pays loving tribute to his grandmother as he covers the broad scope of his life.

Leon’s Grandma Mamie had a hard life. She raised 13 children and then took in Leon when he was 4 and kept him for four years while his mother found her own way in the world. Prayer and the belief that her children and grandchildren could have a better life than she had had kept Mamie going, and she pushed Leon to always do his best. “[She] put in those endless days of work and effort,” writes the author, “and her kids never missed a meal. She led that life, that hard, country life, without the comfort of a partnership and some love coming back.” Leon’s love and devotion to his grandmother are evident throughout the narrative of his childhood and his rise through the ranks as an actor and director. The author discusses her cooking, her clothing and colorful hats, the way she talked, and how she almost always had visitors and was happy to throw together a meal for them. He shares his personal doubts and fears as he worked first as an actor and then as a director in the Alliance Theater in Atlanta. He also writes about his relationships with women, his professional working relationship with the playwright August Wilson, his endeavors to bring more diversity to the stage, and the founding of his own theater company, Kenny Leon’s True Colors Theatre Company. The author, who won a Tony for his direction of A Raisin in the Sun in 2014, shows how the supportive words and actions of his closest family members instilled in him a strong confidence in his ability to dream big and overcome the obstacles in his path.

Offering a well-rounded look at his successful life, Leon’s memoir is self-reflective and encouraging to those who might harbor self-doubts about their own abilities and pursuits.