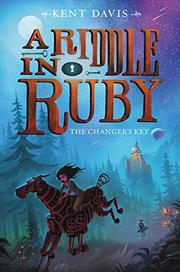 From the A Riddle in Ruby series, volume 2

It’s what inside that counts—particularly when it’s a ciphered secret hidden in your blood.

In this sequel to A Riddle in Ruby (2015), Ruby Teach has been taken prisoner by her nemesis, Wisdom Rool. Prison, as it turns out, is a fortressed training camp for reeves, the crown’s warriors and spies and the thorns in Ruby’s side. When a creepy doctor there pledges to interpret the secret in Ruby’s blood, Stockholm syndrome surfaces, and she decides siding with Rool has a certain appeal. As her father and friends battle wilderness and bounty hunters to rescue her, Ruby struggles to comprehend what secrets stream through her veins, what the moral repercussions for serving Rool may be, and what the actual threat to Colonial America is. Where Book 1 stumbled in finding its meter, here there is no faltering, just momentum. Wilderness, fortresses, predatory cats, and a yeti for good measure transmute a game of find-the-Ruby into a combustive delight. Fans of Snicket-ian gloom will revel in the thrill that the oft-grim landscapes proffer. Dastardly, heroic, and powerful roles are played by both sexes, but this tale is well-populated by members of the not-so-weaker sex who are ready to throw a punch. In this alternative Colonial America the demographic tends toward white. However, good vs. evil vs. undecided serves the conflict more than race or socio-economic cataloging.