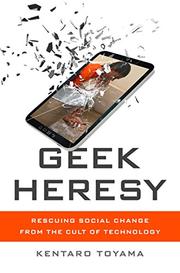 Rescuing Social Change from the Cult of Technology

A well-meaning but arid argument, by a former Microsoft executive and current MIT fellow, against the presumed Trojan horses of technology.

Issuing an affordable laptop to every school kid will save the developing world, right? Well, probably not—and not even Nicholas Negroponte would say so. The argument Toyama advances contains or at least implies such straw men, for of course there are many other considerations: are skilled teachers available? Is learning valued at home? Will the girls of the village be allowed to learn how to work a spreadsheet, or will they be forbidden from doing so because, as Toyama cites in one case, such knowledge will drive up their dowry prices? Throwing technology at problems that are fundamentally social and cultural in nature, argues the author, will likely prove ineffectual; he coins a “Law of Amplification” to that end, namely, that “technology’s primary effect is to amplify human forces.” Marshall McLuhan said much the same thing half a century ago. Toyama makes some good and perceptive points along the way, observing that if the same technology, for instance, can be used for both entertainment and education, people will choose entertainment every time and that technology often leads us to invent needs that we didn’t know we had (“Few people imagined before 1979 that they would want to live in their very own cocoons of music”). He is also correct to note that the proper goal of economic development is to develop not consumers but producers, even if many First World technologies seek only the former (“modern global civilization seems stuck in a form of self-actualization marked by consumption and personal achievement”)—and that meaningful education and social development are both expensive and require plenty of follow-up, something that one-laptop schemes underemphasize.

A white paper largely of interest to education theorists and aid specialists, with occasional asides for the Jaron Lanier/Nicholas Carr crowd.