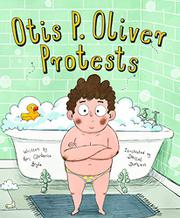 To bathe or not to bathe? To Otis P. Oliver, that’s definitely not the question.

Otis P.’s peeved: The dog bathes once a month; he is forced to take four baths a week. How to show he’s serious about avoiding bathtime? Otis dons his dad’s suit and tie, delivers a rousing speech to bath-disgusted pals, and marches the unwashed bunch to his lawn, picket signs aloft. Notes passed between protester and mom, expressing Otis’s tub aversion (and, parenthetically, his dinner concerns) and mom’s responses—with put-upon sisters and dog acting as go-betweens—eventually effect a satisfactory compromise. In the end, though, Otis P. shows he has one more card to lay on the negotiation table. This comical tale about achieving one’s aims creatively should strike a resounding chord with kids, particularly those who aren’t on speaking terms with bathtubs themselves. Children will giggle at Otis’ tactics and back-and-forth correspondence. The expressive illustrations are humorous, energetic, and incorporate the hand-written notes, shown transcribed on pieces torn from lined notebook paper. Otis is white, chubby, and crowned with brown curls; wavy lines suggest he reeks. His family presents with various tones of pale skin and different hair colors and styles; one sister wears glasses. The skin colors, sizes, and hairstyles of Otis’ chums are diverse.

Even bath-happy readers will want to hear this book.