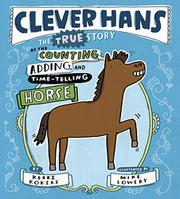 The True Story of the Counting, Adding, and Time-Telling Horse

An astonishing horse baffled both the public and the scientific community.

In 1904 Berlin, Wilhelm von Osten taught his horse, Clever Hans, how to count, discern colors, and perform other intellectual tasks. He then showcased Clever Hans’ talents to the masses, and people were astounded to see a horse that could seemingly tell time, add up sums, and count money! But not everyone believed the spectacle. Some thought there must be trickery involved. One scientist investigated independently, and the German government asked another to assemble a team of investigators. They decided it wasn’t a trick, but they still couldn’t understand the phenomenon. Then a scientist named Oskar Pfungst made an important discovery. What he realized about Clever Hans—who was certainly clever, just not quite in the way everyone thought—changed the scientific process forever. Kokias’ clear, accessible tone pairs well with Lowery’s cartoon style. The comically smiling horse invites readers in, and intermittent paneled frames help organize the flow of information and visually propel the storytelling arc. Von Osten, the investigators, and spectators present white. English translations of certain German words (“Zeitungen”—“Newspapers”) are also included, with playful arrows pointing readers to them. An author’s note further explains the “Clever Hans Effect” and how it changed science.