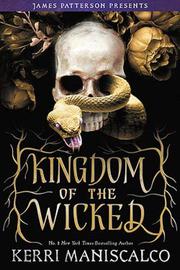 KINGDOM OF THE WICKED

From the Kingdom of the Wicked series, volume 1

Eighteen-year-old Emilia di Carlo and her twin sister, Vittoria, have a secret: They are streghe, trained from a young age to use magic. Emilia is as introverted and romantic as her sister is bold and irreverent, but they share a love of good food and a disregard for their grandmother’s warnings about the devil and his brothers. Known as the Malvagi or Wicked, the seven princes of Hell have not been seen in years until tragedy strikes and a foray into forbidden magic accidentally summons the Prince of Wrath: Three witches—including Vittoria—are dead, and Emilia is desperate to avenge her sister and stop the killings. An uneasy truce with Wrath soon blossoms into a tantalizing, dangerous attraction with an uneven power dynamic. Rich worldbuilding constructs a post-unification Kingdom of Italy in which witches, demons, and shape-shifters live—and battle—among oblivious humans in a society strongly influenced by the Catholic brotherhood in its midst. Several significant plot points unfold in a Capuchin monastery and its eerie catacombs, and the brotherhood's conflation of witchcraft with the devil is emphasized throughout. Most characters are cued as White—Emilia and her sister have brown eyes and hair and olive skin—while the dark-haired Wicked have golden skin.

An intoxicating, tightly plotted feast for the senses with a dramatic cliffhanger.