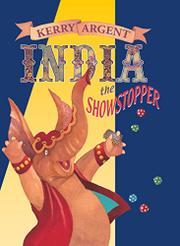 India the harmonica-playing elephant is so used to being the star of the Big Top that even though the circus is failing, she doesn’t take kindly to the arrival of a new trainer. Indeed, being a huge, quirt-bearing rhino wearing leopard skins and a billowing purple cloak, Oswaldo the Magnificent comes across as a rough customer in Argent’s big, bright pictures. Soon all the other animals are dancing to his tune—and he’s the one in the spotlight. Unable, or unwilling, to learn new tricks, India soon finds herself out of the show entirely. One night after a semi-intentional mishap she flees, but, cannier than he looks, Oswaldo draws her back by convincing her that she would be an even bigger star as a harmonica-playing elephant...on roller skates. The plot doesn’t really hang together, but the all-animal cast, which is posed on two legs, dressed in circus garb and placed right up front in every scene, will draw young audiences out of their seats to check out the circus action. (Picture book. 6-8)