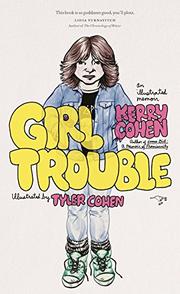 To all the girls she’s liked before, a memoirist offers a series of interconnected essays.

Though she has characterized herself as “boy crazy” and previously documented that label in Loose Girl (2008), Cohen shifts her focus to her relationships with other girls—the ones who rejected her as a friend, the ones she rejected, the ones whom she saw as competition or yardsticks by which her own failings would never measure up. Some were witnesses and some were judges whose verdicts on her as unworthy have continued to reverberate through her adulthood and motherhood. A psychotherapist would focus on her parents’ bitter divorce as the key to her alienation and lack of self-worth. “In most of my friendships, I’d been fun and happy and unafraid,” she writes of a pivotal day when she felt ostracized. “But that day something shifted. For the first time I saw myself in the world, with others around me. My parents divorcing. My mother’s grief. My own sense of newness and change, of the world spinning out of control.” One of the ways this book offers healing is through Cohen’s collaboration with the illustrator, her older sister Tyler. During “an ugly divorce, fraught with affairs and devastation and anger,” their mother chose the older sister as her ally and confidante, leaving a breach between the two sisters that they wouldn’t repair until adulthood. Her sister was her first true female friend and the first betrayal (of many). While recognizing that “memory is a slippery eel,” Cohen surveys the dozens of relationships with women she has enjoyed and endured, showing how friendship changes with different stages and how she has as well. “I miss all of my ex-friends,” she writes toward the conclusion. “They are stamped onto my heart like old romances, lost loves. They are parts of me in ways no one warned me they would be.”

A brief, canny book that will make any girl who feels alone feel less alone.